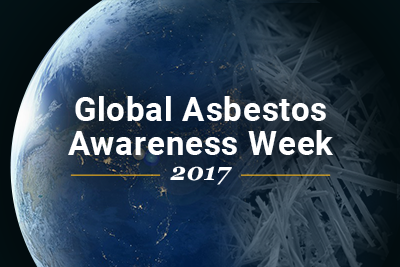 This week is Global Asbestos Awareness Week. The Asbestos Disease Awareness Organization (ADAO) sponsors this event annually during the first week of April. The goal of this week is to raise asbestos awareness in order to prevent asbestos-related diseases. Many people aren’t aware that exposure to asbestos is still a common problem, especially in an occupational setting.

In the past, people may have known they were working with asbestos but not been made aware of the dangers. Now, asbestos is used less often but the asbestos that was used in the past may still be in place. Some unexpected individuals are exposed in their workplace by in-place asbestos. Some occupations that are unknowingly exposed to asbestos are:

These are just a few examples of occupations where an individual can be exposed to the harmful effects of asbestos in their environment. Circumstances of asbestos exposure can be avoided by hiring professional abatement companies, by using proper protective equipment and by knowing your surroundings, such as up-to-date building codes.

Many individuals are not aware of being exposed to asbestos.They do not begin showing symptoms of it, until many years later. It takes anywhere from 20 to 50 years for symptoms of mesothelioma to develop.

There have been over 125 million people exposed to asbestos in their workplace. One of the ADAO’s main goals is to advocate for asbestos bans. If governments around the world commit to banning the use of asbestos, we can only hope that one day the number of people that are exposed will decline.