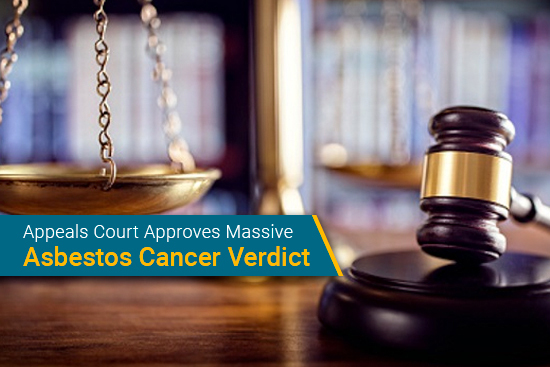 A Missouri appeals court upheld a multi-billion-dollar verdict in a Johnson & Johnson case tied to a group of women’s asbestos-caused ovarian cancer. The New York Times reported that the court reduced the original judgment of $4.69 billion to $2.12 billion.

The court’s decision should be uplifting news for people with mesothelioma, another cancer caused by asbestos.

The case involves 22 women who sued Johnson & Johnson, a baby powder manufacturer. The women claimed the talc powder included asbestos, which led to their ovarian cancer. The original verdict, which came in 2018, was at the time the largest-recorded asbestos lawsuit verdict.

Asbestos in talc products can also lead to mesothelioma, and many patients have held companies like Johnson & Johnson accountable with legal claims. Multi-billion-dollar verdicts are rare, but quite a few mesothelioma lawsuits ended in rulings eclipsing $100 million.

The legal reasoning for these verdicts is simple: These corporate giants knew they were putting consumers in danger. Courts across the United States have ruled that Johnson & Johnson, and other manufacturers, knew their talc products could be tainted with asbestos. Reports cite evidence, including internal memos, that support this claim.

Asbestos and talc are naturally forming minerals, and they often are found in the same geographical locations. They can easily blend together during mining.

Talc on its own is not considered dangerous. In powder form, it can absorb moisture and help skin flourish. If it’s contaminated with loose asbestos fibers, talc becomes a substantial risk.

Applying the powder can release the intermingled fibers into the air. Breathing in or swallowing those sharp particles can lead to tissue damage, which is the basis of cancer.

In May, Johnson & Johnson announced it would stop producing and selling its talc-based baby powder in the United States and Canada. The company still faces thousands of asbestos lawsuits.

Despite overwhelming evidence to the contrary, the company continues to refute claims that its talc products are unsafe. Johnson & Johnson officials cited market changes and legal advertising as the reasoning for discontinuing its baby powder.

In the Missouri case, the New York Times reports that the court slashed the original verdict due to tossing out some of the patients’ claims. The biggest drop was from compensatory damages, which went from $4.14 billion initially to $1.62 billion.

If you have mesothelioma and want legal help, we can put you in touch with a lawyer. Email our patient advocate Carl Jewett at cjewett@mesotheliomaguide.com. He can explain the best approach to mesothelioma claims.