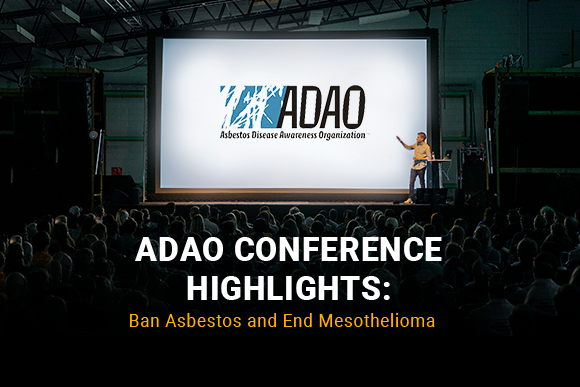 Conference Urges Asbestos to Be Banned

During ADAO’s conference, new findings and stories were shared by researchers and speakers. For those that couldn’t make it to the conference, ADAO invited them to watch via live streaming.

“Our conference this year brought together asbestos researchers and ban advocates from across the globe all asking for the same thing: that we stop considering asbestos exposure acceptable,” stated ADAO’s President Linda Reinstein.

According to ADAO, there has been an increase in asbestos-related diseases. This evidence was revealed by Dr. Jukka Takala. Dr. Takala serves as the President of the International Commission on Occupational Health.

These morality numbers are appalling. Dr. Takala’s discoveries not only support that asbestos needs to be banned, but they suggest that asbestos-related diseases are extremely under reported.

In fact, Dr. Takala’s data insists that every year in the United States approximately 39,275 asbestos-related deaths occur. Unfortunately, this number is double the amount that is published by agencies of the U.S. Government.

“These new findings make the call for a ban in the United States even more critical, and we are hopeful the EPA specifically will take note and make the appropriate response,” Reinstein commented.

Putting an End to Mesothelioma

Dr. Raja Flores is a well-respected name in the mesothelioma community. He is known for changing the lives of many patients by treating them with either extrapleural pneumonectomy (EPP) or pleurectomy with decortication (P/D).

At ADAO’s conference, Dr. Flores spoke about the connection that asbestos has to both patients and manufacturing industries. He even floored the conference attendees by informing them that it still isn’t banned in the United States.

Dr. Flores shared briefly about his experience of working in an office that contained asbestos. He also revealed that even though treatment for mesothelioma and other asbestos-related diseases are improving, that legislation can save more lives.

“With mesothelioma and asbestos-related cancers, the pen is more powerful than the knife. And I hope that after this meeting, we just don’t go about our days, but we continue to push for legislation that can actually save lives,” Dr. Flores concluded.

Dr. Flores is considered to be one of the top mesothelioma specialists in the United States. Patients travel near and far for his expertise in treating asbestos-related diseases at the Mount Sinai Medical Center in New York.

ADAO awarded the “Tribute of Hope Award” to both U.S. Senator Jeff Merkley and U.S. Congresswoman Suzanne Bonamici. Both Merkley and Bonamici are sponsors of bills that have one mission: ban asbestos.

“We have known about the dangers of asbestos for decades, and many countries have banned it for good reason. It’s past time for Congress to take action and save lives,” said Bonamici.

Asbestos is still legal in the United States. In the last decade, over 8 million pounds of this carcinogen went through U.S. ports.

Some products that still contain asbestos are:

“The chemical industry continues shamefully to seek a way to profit from a known carcinogen, putting the lives of miners from other countries at risk, as well as those exposed during and after production,” declared Reinstein.

Every day ADAO and mesothelioma warriors from across the U.S. and around the world continue to fight. With each battle, they become one step closer to ending preventable diseases and officially banning asbestos.