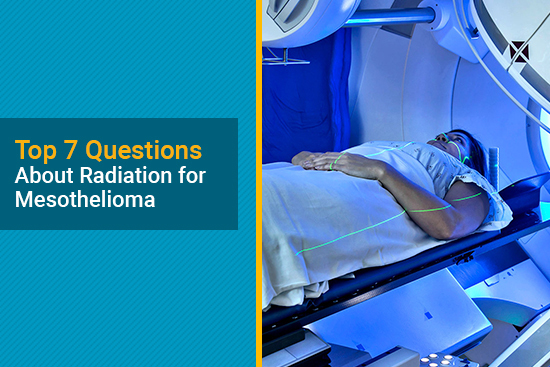 Top 7 Questions About Radiation for Mesothelioma

The medical community continues to utilize technology to its benefit. Cancer treatment is no exception.

The specific type of treatment that may benefit the most is radiotherapy, also called radiation therapy.

Radiation, along with surgery and chemotherapy, is a conventional approach to treating mesothelioma. This rare form of cancer does not have a definitive cure, nor does it have a universal approach to stopping its rapid spread in the body. Radiation, though, has extended the lives of many people diagnosed with mesothelioma.

Before starting radiation for your mesothelioma, do your research and ask the pressing questions of your oncologist. We’ve compiled a list of the seven most-asked questions about radiation therapy for this cancer.

If you have further concerns or want more insight, please email our registered nurse Jenna Campagna at jenna@mesotheliomaguide.com. She can also help you find a cancer center with an on-staff radiation oncologist who specializes in mesothelioma.

How Does Radiation Therapy Work?

Mesothelioma isn’t like most cancers. It doesn’t involve one ever-growing tumor. The disease is made up of microscopic tumors that continue to multiply as cells replicate and spread. Imagine a cluster of warts that form together on your tissue. You can’t focus on just one tumor because there are tens and hundreds more.

The makeup of mesothelioma is why it’s so difficult to defeat. Surgery usually requires removing an entire area or organ of your body. Chemotherapy isn’t strong enough or fast enough to address all the tumors.

It’s unrealistic for radiation to completely eradicate all mesothelioma tumors, but the therapy can diminish the size and scope of the cancer in the body. It can also “sterilize the margins,” as explained by mesothelioma specialist Elliot Wakeam of Michigan Medicine, and has proven to be an effective teammate of surgery and chemotherapy.

Can Radiation Treat All Types of Mesothelioma?

Pleural mesothelioma forms near the lungs — in a small cavity called the pleura — and often reaches the lungs first. Radiation has side effects — most notably damage to healthy tissue — and can affect the operation of vital organs.

Since the lungs are the first organ at risk, and some patients can survive with only one working lung, the reward of radiation therapy can outweigh the risks.

Peritoneal mesothelioma forms in the lining of your abdominal cavity (the peritoneum). Your abdomen includes much more than one organ (small intestine, liver, kidney and others), and most of them are vital to your body staying alive. So damaging their tissue could have life-threatening consequences. The risk far outweighs the reward.

What Are the Types of Radiation Therapy?

There are three noteworthy types of radiation: photon, intensity-modulated and proton.

Photon radiation is the oldest form of this therapy. Intensity-modulated radiation is a more-focused type. Both can cause damage to lung tissue, which is a condition called pneumonitis.

Damage to the lung closest to the tumors sometimes is unavoidable. Damage to the other lung, which is usually the only fully healthy lung following treatment, must be avoided.

Proton radiation, which has emerged in the last 30 years, can avoid severe pneumonitis cases in the remaining lung. Proton beams limit damage to surrounding tissue, which is valuable for people receiving radiation to their chest.

Can You Use Radiation With Surgery?

Yes, you can. If you’re healthy enough, your mesothelioma specialist should suggest it.

Traditionally, mesothelioma doctors used radiation after surgery. An operation would involve removing a large chunk of tumors by merely taking out the pleura or peritoneum (along with other affected and expendable organs or tissue areas).

But since mesothelioma spreads so fast, peripheral tumors may have formed beyond the area removed during surgery. Radiation can target those residual diseased cells.

Some doctors now use radiation before surgery. Dr. Wakeam, for instance, champions radiation therapy prior to aggressive surgery for pleural mesothelioma.

How Does Radiation Therapy Improve Survival?

Radiation can extend your survival by several months, or even a full year. According to one study, more than half of the people who had radiation for their mesothelioma survived for two years. The general survival time is around a year.

When used after surgery, radiation can extend survival to 30 months. That amount of time was the median result for patients who had radiation therapy after lung-sparing surgery.

When used before surgery, radiation has phenomenal survival benefits. Michigan Medicine’s staff tested radiation before aggressive surgery in patients with the epithelioid cell type. The median survival was 51 months, and around 72% survived for three years.

What Are the Side Effects of Radiation?

One of the most significant side effects was mentioned earlier: damage to healthy tissue. This side effect may persist for months or years — or for the duration of your life.

Other side effects of radiation are:

How Should I Find a Radiation Specialist?

You should prioritize finding a cancer center, specifically one with a specialized mesothelioma treatment team. These institutions are called Mesothelioma Centers of Excellence, and we can help you find one that offers on-site radiation therapy. Please email our registered nurse Jenna Campagna at jenna@mesotheliomaguide.com for more help.