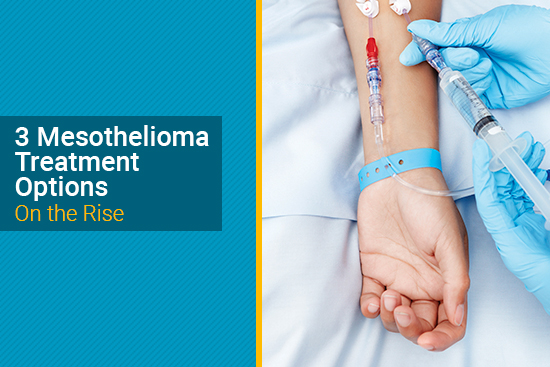 3 Mesothelioma Treatment Options on the Rise

People with mesothelioma don’t have many treatment options.

A combination of surgery, chemotherapy and radiation is the standard of care. For years, chemotherapy was the only method with approval from the United States Food and Drug Administration.

In 2019, that changed. Now, in 2020 and looking forward, there’s a lot of potential for another unorthodox treatment to emerge.

Last May, the FDA approved using the NovoTTF-100L System on a limited basis for pleural mesothelioma. Patients can use the treatment as a first-line option with chemotherapy — and only if they aren’t candidates for surgery.

The NovoTTF-100L became the first mesothelioma treatment option in 15 years to receive FDA approval. In 2004, pemetrexed was approved for treating this cancer.

Hopefully, we won’t have to wait another 15 years for the next approval. Here are three classes of cancer treatment that could break through soon and get approval from the FDA.

If you’re interested in accessing any of these cancer treatment techniques, please email our registered nurse, Jenna Campagna. She can help you connect with a mesothelioma specialist and look into experimental treatments. Please email her at jenna@mesotheliomaguide.com.

Immunotherapy is at the forefront of many clinical studies involving mesothelioma. The treatment uses drugs to enhance the body’s immune system. The theory is that the body could better fight mesothelioma with just a little outside help.

There are a few variations of immunotherapy. The one used the most in experiments is checkpoint inhibitors. This type of immunotherapy drug targets the relationship between two proteins: PD-1 and PD-L1.

When the two interact, the T-cells cannot detect mesothelioma cells as dangerous to the body. Basically, the PD-1/PD-L1 connection is a mask for mesothelioma.

Dr. Patrick Forde and his team are testing immunotherapy with surgery and chemotherapy for pleural mesothelioma. Dr. Forde is a thoracic oncologist at Sidney Kimmel Comprehensive Cancer Center at Johns Hopkins.

The clinical trial involves two stages of two immunotherapy drugs: nivolumab and ipilimumab. Patients receive three doses of nivolumab before surgery and one dose of ipilimumab. Then patients can receive further immunotherapy treatment after surgery.

Immunotherapy’s versatility is one of the treatment’s best qualities. It can be used before or after surgery, in conjunction with chemotherapy, and even paired with other emerging therapies.

Dr. Forde, who specializes in treating pleural mesothelioma, said immunotherapy can reduce the size of tumors and how widespread they are in the body. This regression can help surgeons remove the diseased cells during operation.

There are numerous forms of gene therapy. One type involves restructuring the genetic characteristics of infected cells. Another type — one called “suicide gene therapy” — uses genes to engage the immune system and attack the tumors.

Gene therapy usually isn’t sufficient on its own. Instead, it’s used in conjunction with other mesothelioma treatment options.

The purpose of gene therapy is to repair or weaken infected cells. Repairing can reduce the number of dangerous mesothelioma cells in the body. Weakening can increase the effectiveness of other treatment methods, such as surgery, chemotherapy or immunotherapy.

A Phase 3 clinical trial involving gene therapy might be the most promising one available to pleural mesothelioma patients. Dr. Daniel Sterman is the director of the Multidisciplinary Pulmonary Oncology Program at New York University Langone Health. He is the lead investigator in the study, which combines gene therapy with chemotherapy.

The increased production of this protein alerts the immune system of danger. The T-cells recognize that the cells are producing this protein and begin attacking them.

The Phase 2 results were astonishing — in a positive way. The disease control rate — meaning the cancer either was stagnant or reduced in size — was 87.5% for enrolled patients. Additionally, the survival time for patients who received this gene therapy treatment nearly doubled compared to those who didn’t.

Virotherapy involves using programmed viruses to either attack mesothelioma cells or kickstart the immune system. Virotherapy also is used as a vessel to transfer other forms of therapy into the body.

It’s another outside-the-box method to help the body stop mesothelioma’s progression. There are three types of virotherapy used in experimental mesothelioma treatment:

Oncolytic viruses are modified viruses that focus on cancer cells and ignore healthy ones. This form of virotherapy explicitly targets mesothelioma, and it’s the most common type of the treatment.

Viral vectors are “transports” for other forms of treatment. Viral vectors could deliver modified genes or an immune system enhancer.

Viral immunotherapy involves using viruses to “activate” the immune system. Since the viruses are considered intruders, the immune system senses danger and looks for these viruses. Doctors often program the virotherapy similar to the genetic structure of mesothelioma cells. Doing so allows the immune system to identify harmful cells based on these genetic characteristics.

A new clinical trial involving virotherapy and immunotherapy has potential. The study uses ONCOS-102, which is a modified virus that transports immune system stimulants (cytokines).

ONCOS-102 is a combination of viral immunotherapy and oncolytic viruses. The virus aspect breaks apart the mesothelioma cells, and the cytokines send danger signals to the immune system’s T-cells. When the mesothelioma cells break apart, they release antigens that the T-cells recognize as cancerous.

This two-pronged process involving virotherapy and immunotherapy has helped patients. Those receiving ONCOS-102 plus chemotherapy had a progression-free survival of around nine months.